Premier League Betting: Man City are odds-on favourite on Melbet to win, but Man Utd could be good value 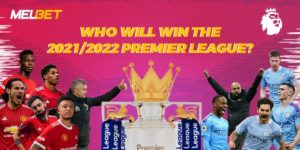 The last time Manchester United won the Premier League title, Sebastian Vettel was still a Red Bull driver on his way to winning his fourth and last Formula 1 title.

Since winning the league in Sir Alex Ferguson’s final season, Man Utd have had to endure the pain of watching their city rivals Manchester City, Chelsea, Leicester City, and their arch-rivals Liverpool win the league.

However, while it’s been over seven years since they last won the top-flight title, and it could all change during the 2021/2022 league season, although this will be a tough task.

Man City are the defending champions and favourites as expected. The Citizens have arguably the best squad in the league and are expected to strengthen again this summer.

Pep Guardiola’s men are priced at 1.74 odds to win on Melbet, which is not a surprise, given the quality of players in their team. Chelsea are the second favourite after Man City with a value of 5.95 odds on sports betting site Melbet.

The Blues are expected to provide stiff competition to City’s title defence after beating them in the Champions League final. Chelsea were City’s bogey team last season, winning three of their four encounters against them.

And with Thomas Tuchel expected to be backed heavily in the transfer market, it’s not hard to see why they are second favourites. But their form in the business end of the campaign last season, labouring to a fourth-place finish, suggests they might not be able to go the distance with City.

Liverpool are third favourites to win back the title they lost to City. The Reds are priced at 6.00 on Melbet to win the title, but a lack of activity in the transfer market could hurt their chances.

This leaves Manchester United as the likely threat to City’s title defence. Ole Gunnar Solskjaer’s men are the fourth odds-on favourite to win the Premier League title with odds of 8.00 on Melbet Nigeria.

While that’s too high and maybe risky, it’s a good value. United are the only side City failed to beat in the league last season. Both sides played a goalless draw at Old Trafford before United won 2-0 at the Etihad Stadium.

Solksjaer’s men were also the only team that gave City a little bit of a challenge last season- although they still came up short in second place.
Man Utd have shown progress under Solksjaer in recent years. With additions like Jadon Sancho and potentially Raphael Varane, the Red Devils could end their title drought next season.